The Yoga of Service: One Teacher’s Journey into Seva 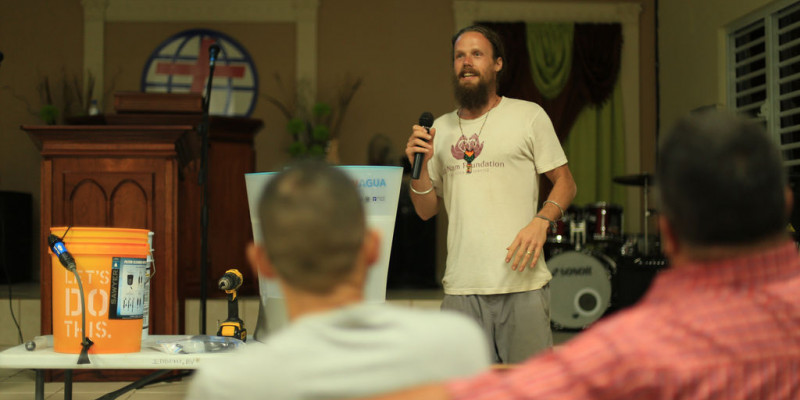 Blog categories:
Around the World, Personal Stories, Seva & Giving Back

When I began my level 1 Kundalini Yoga teacher training, the phrase “Start Now” rang in my mind like a choir of church bells. I was 22 at the time and teaching full time math and science at an inner city middle school in Los Angeles. In the first few days of training I approached my teacher, Gurmukh, for a meditation to share with my students. I was nervous that my enthusiasm to share this science would be frowned upon since I was not yet ‘certified to teach.’ Yet I received the opposite reaction. Gurmukh smiled in delight and shared a simple meditation that involved clapping and opening the arms in particular rhythm. It was the perfect segue into meditation for most of my students.

On the following Monday, I began all of my classes with this meditation. The first few days my students looked at me with wide-eyes like I was a crazy man, though I could see that below the surface they were enjoying this strange way of beginning math class. Smiles became more frequent as students entered my classroom, and the rhythmic meditation helped bring the whole class together as one.

The science behind the meditation is simple. The clapping of the hands balances and activates the brain, the movement of the arms opens the heart, and the rhythm drops your mind into a theta state. I saw immediate results. My kids began entering the classroom silently, they became more attentive as class began, and they enjoyed the few minutes of space that I allowed them in order to drop into harmony with each other. This was my first step to living a conscious life of service.

I continued to have the desire to share unconditionally with my students. Gurmukh continued to give me new meditations and techniques to try in the following weeks and months. My students were equipped with a toolbox of mudras and pranayam to use when they needed it. Though many of them craved more. My Principal, Ms. Brunt, gave me permission to open my classroom twice a week after school for a ‘Yoga Club.’ For the following year, my class filled up after school and we chanted, moved out bodies, and explored the space within ourselves through meditation. Those moments will forever live in my heart.

The ripple of zen positivity began spreading through our k-12 school of a 1,000 kids. During breaks I would peak my head out of my class and see my students sharing meditations with their friends, i.e. “I am Happy, I am good.” The vibe was contagious. Teachers began asking me, “Why are all these kids saying they are SO happy?” The answer was simple: Kundalini Yoga.

My two years at 32nd St. USC MaST taught me the value of small acts of service. I was not trying to save the world with my Yoga Club or the meditations I was teaching in school. I was just sharing what I could. Though when my students left the room with their yogic toolkits, a ripple effect flooded the school that can still be felt now. Ten years have passed since I left LA, and my students still reach out to me in gratitude for the simple techniques I shared with them.

Though my life took an abrupt turn, I learned that nothing was worth doing unless it was in service. When I am serving the other, I am serving myself, and vice versus. I began choosing jobs that allowed me to express myself and follow the path of truth that I believe in. If anything began to compromise this, I simply finished my agreement and changed the position I was in.

Living in the state of absolute faith and fearlessness brought me all around the planet. With my backbone being a strong sadhana, the wave of life began to carry me. I found creative ways of existing. Sometimes I found myself living extended periods of time on an island in a tent and wild harvesting the majority of my food. Other times I found myself in expensive cities teaching yoga in trade for a place to stay and meals. As long as I stayed flexible and true to my heart, everything was possible.

On one fateful day, I was camping in a valley with friends on the North coast of Hawaii. I heard a scream for help. Instinct led the way, and I sprinted to the beach. I saw about 20 people looking into the rough ocean, and one man up to his knees in water screaming like a wild man. I ran up to this man and asked what happened. He replied, “ My son was swept away by a wave and he does not know how to swim. He is drowning.” I saw a lifeguard buoy around 100 meters from where we were standing. Without hesitation, I ran, grabbed the buoy and took off into the waves.

Luckily, I have been a strong swimmer since I was a child, and I was a lifeguard for 6 years. I was able to spot the young boy bobbing in the water gasping for air. I scooped him up on the buoy and brought him safely to shore. Then I went back in the water to help the 3 drowning adults that had attempted to save the boy. The family of the boy treated me like a hero, though I truly felt in my heart that it was a pleasure and honor to help. I was offering the skills I had in the moment when they were needed. I left the beach with a strong urge to continue to serve and help save lives.

I contacted the Hawaii Coast Guard search and rescue, and was told that it was a military unit. Even though this was not an option, I was still determined to use my skills and strong body to help people in the water. When you ask, the Universe delivers.

Not long after leaving Hawaii, Ramdesh Kaur contacted me on behalf of Sat Nam Foundation. She told me children were drowning in Greece and asked me if I knew any lifeguards. My opportunity to serve in the water arrived in full force. She asked me when I could leave, and I replied, “Now.”

I quickly educated myself on the war in Syria. I learned about the escaping refugees and the hardships they are facing. One of the most dangerous was the crossing of the Aegean Sea in between Turkey and Greece. Smugglers squish refugees on to inflatable boats and send them on the dangerous journey without a captain! Most of these people had never seen the ocean, let alone drove a motor boat. Many of the boats hit rocks as they approached Greece, and the passengers would drown.

The international law was strict and there was very little response from Governments beyond trying to stop the refugees from leaving the coast of Turkey. This resulted in smugglers creating more dangerous routes and sending boats at night to avoid encounters with the coast guards.

Sat Nam Foundation released a Kirtan Aid album and raised the money to sponsor my service for 3 months as well as the search and rescue equipment I needed to be safe. I arrived in the winter when the casualty rate was at its highest, and also when the volunteer movement really began to take off. I was able to make connections quick on the ground. I found a small team (Refugee Rescue) that had just received a $75,000 donation and bought a rescue boat. They were in need of crew. I joined without hesitation and also helped recruit more crew members.

Our team joined a group of international volunteer search and rescue teams. We began organizing ourselves on the water. We created a schedule and refined our techniques for finding refugee boats and bringing them safely to shore. Before I arrived, around 30 people a day were drowning from accidents. During my 3 months there, not one person drowned in Greek waters.

Absolutely blown away by the efforts of the international volunteer teams, I decided to devote my life to serve. The board of directors of Sat Nam Foundation offered me the position of Director of Operations for the foundation. For the past 2 years I have worked passionately at building our foundation into a force that brings together the yoga community through service. There are millions of yogis in the world, together we can shape history.

I encourage you to join the movement of selfless service with Sat Nam Foundation! Sat Nam Foundation was founded by a committed team of Kundalini Yogis, including the owners, artists, and employees of Spirit Voyage & Sat Nam Fest,  who are passionate about service and who wanted to create ways to put the yoga of service in action. We strive to create lasting change wherever we are called, to protect the resources of Mother Earth, and to give selflessly to those in greatest need. We have served people and projects in India, Puerto Rico, Mexico, Syrian Refugee Camps in Greece, Nepal, Haiti, the USA, and South Africa. In 2018, our primary focus is providing live-saving access access to clean water.In 2019 we will begin a project in Northern India to support the establishment of sustainable systems to provide clean water, healthy food, education, clothing, infrastructure and reliable medical support for the children of Manjushree Orphanage. In March, Gurmukh and Sat Nam Foundation will lead a group of 6 yogis to Manjushree to begin this project. For more information visit www.satnamfoundation.org. Contact Jaidev at [email protected].