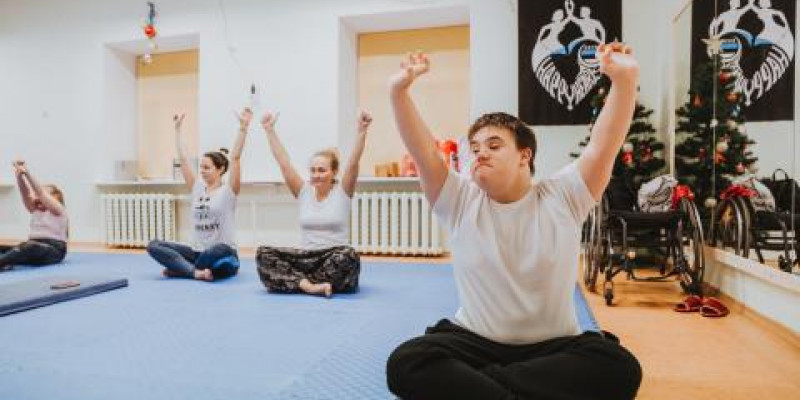 My main students are teenagers, kids, and youth with physical and psychological disabilities and their parents. I teach at the studio and on-line. Young people with disabilities who practice Kundalini Yoga regularly over the years show excellent results in their development.

One of them is Matvey Smirnov www.beu-fund.com/matvey-smirnov Matvey has been practicing Kundalini Yoga for 2.5 years. He is 17 now. He was diagnosed with Down's syndrome.

Matvey could not crawl, sit or talk for a while. His physiatrist said "as if there were no muscles in his body." Nevertheless, he was on his feet when he turned three. He started walking when he was four. After that, his verbal skills started developing.

Matvey tries so hard and wants to learn, but it is much harder for him to solve some tasks which other kids can handle easily. Matvey is very interested in classes, where he can practice with adults. He is ready to do anything with a group of people: writing, painting, coloring, reading books together.

But he likes Kundalini Yoga classes most of all!

Thanks to the yoga classes and the rise of kundalini energy, he became interested in dance and jiu-jitsu. He participated in the international dance festival NO LIMIT in 2019 where he performed his solo dance and received an Audience Choice Award.

Matvey gets an opportunity to meet new people and establish friendships via Kundalini Yoga classes. He practices on equal terms with everyone and learns how to be part of a group. If you ask Matvey to tell you about himself, he will just say that he is a "cool guy, who loves yoga and music."

Matvey's motor skills improve when he practices Kundalini Yoga regularly. Also his thought process and awareness are much better. You can see an increased awareness and an orderly manner in his actions and thought process when he does arm swings, breath of fire, twisting and Sat Kriya.

All these great accomplishments in Matvey's demeanor prove again and again that when one's Kundalini energy is raised, the soul's crystallization happens.

The main goal in our practice is to raise awareness, and Matvey is experiencing it more and more. Matvey's Kundalini Yoga practice is filled with understanding, precision to detail and awareness - he is moving his body parts consciously; he knows what he's doing and how he's doing it.

By implementing Kundalini Yoga technology in its precision, Matvey's mental and physical limitations are abating. We believe that Matvey's case is a good example for clinical research on the effects of the technology of Kundalini Yoga on kids and adults with physical and psychological disabilities. Perhaps his story can inspire others to teach Kundalini Yoga for disability rehabilitation.