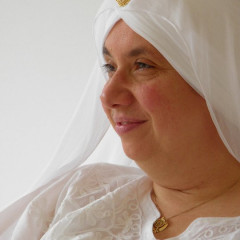 Ek Ong Kaar Kaur received her Kundalini Yoga Level 1 certification in 1996. The year before Yogi Bhajan left his body, he personally worked with Ek Ong Kaar Kaur on a translation of Guru Naanak's Japji Sahib. in addition, he directed her to translate the Siri Guru Granth Sahib into English. From those experiences, Ek Ong Kaar Kaur has developed a speciality in teaching Shabad Guru, the connection between Sikh Dharma and Kundalini Yoga, as well as an understanding of Humanology from the perspective of Gurbani. Order translations that she has completed of Japji Sahib, Anand Sahib and Sukhmani Sahib from a-healing.com. She is currently an Professional Trainer in the Aquarian Academy. Visit her website at: www.ekongkaark.com.