A Journey Through Teacher Training 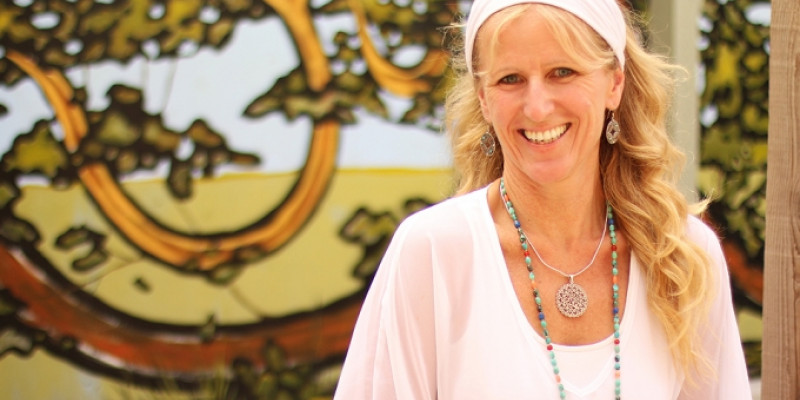 How do we choose to change our lives? What part of us makes that choice that leads us closer to the center of our own heart? Who do we become when we become the best version of ourselves?

This is the story of my journey through the Kundalini Yoga Teacher Training Program.

As I glided past the closed door on my way from a Hot Yoga class to change out of my hot sweat-drenched clothes, I was stopped short by the strange yet somehow familiar sounds that were emanating from inside. Others pushed past me in their rush to the cold showers and back out into their lives. I was frozen to the spot. The pull to open the door was so strong that the phrase “I’m possessed!” came to mind, a line from some old 80’s horror flick. The sounds were so beautiful, so charged with powerful, uplifting energy. And I had the strongest sensation that I had heard them before.

“What kind of yoga class is this?” I wondered, continuing to listen intently. After a few moments, the sounds suddenly stopped and there was silence. Coming back into my reality, I moved on into the busy change room to well.... change. But there was something more than my clothes that were changed on that day.....

I waited until the end of the class, until that door opened. My yoga practice was still new at this time and all of it intrigued me. “What kind of class was this?” I asked myself again as the door opened and I was engulfed by a sea of white. People all dressed in white, like angels...calm, confident, graceful beings. If it was from these people that these magical sounds came, then, “who are these people?” I began to realize as I lingered a few more moments that these were just regular people, taking a yoga class. Then my ego jumped in instantly with “What’s with the white clothes?” and “What’s that on their heads?” I was fascinated. Something deep down inside of me was touched. This was not some ordinary yoga class.

I left that day very curious about what I had experienced. The strong sense of being pulled into that room stayed with me. How could something I had never experienced before feel so familiar? I had only recently ventured into the world of yoga, launching myself into a steady practice in the hot room. After that, each time I returned to my hot yoga class, and walked past that room, my personal practice was changed. I began to feel an emptiness in my practice and started to wonder where the real yoga was. It can’t be all about just an asana practice. I loved the workout and how I felt physically, but where was the spiritual connection? I had not yet found this on my mat.

This was how this journey began for me. I continued with my Hatha practice, and it was quite some time until I had the courage to venture into a Kundalini Yoga class. My first experience of these powerful teachings was intense—physically demanding, mentally challenging and spiritually awakening. Listening to the Gong for the first time, every cell inside of me vibrated. I remember after that first class I had uncontrollable fits of laughter. The true “giggles.” It was like a tap had been turned on inside me. This sense of release, this opening was so potent.

I now knew what my yoga practice had been missing. I had found something that was truly special and incredibly pure. I began to attend Kundalini Yoga classes around the city on a weekly basis. It became apparent very quickly to me that I was meant to teach. Everything about these teachings spoke to me: their practicality and application to my daily life in raising a family and managing a business; their abilty to reach inside me, forcing me to confront myself.

I loved everything about class: the energising and calming breathing techniques; the challenging asana practice; the crazy meditations that had my arms up in the air while chanting words I had no idea the meaning of—yet; the astonishing stillness that was achievable after that; and the lightness and expansiveness gained from the wearing of white clothing. All seemed strangely familiar.

One year after that very first experience, standing outside that door, I launched myself wholeheartedly into the Kundalini Teacher Training Program at the PranaShanti Yoga Centre. I knew I was up against a rigorous nine months of intense yoga and personal transformation. But I was ready. The first few months were blissful as I leapt passionately and diligently into study and practice. I could not get enough. Then suddenly, about four months in, in the dead of winter, I lost my groove. I began to question it all.

The association with the Sikh religion was something I couldn’t get past. Where and how did I fit in to all this? Where does the “religion” stop and the yoga start? And the white clothes, the head coverings, the questions from friends and family about it all. I began to doubt my strength and commitment to get through, and I was experiencing parts of myself that quite frankly I did not like. I did not want to wallow in all the emotional muck that this was bringing to the surface. Everyone around me (outside of the teacher training program) seemed to be quite content with their supposed “unawareness.”

But there was no turning back now. I knew that. I was led by a force stronger than my ego. I bought every book I could find and devoured it all. Each time I questioned myself or the teachings, something pulled me back in. And this is how it went, month after month. As we all got to know each other, it became apparent that each one of us in the class was struggling with different aspects of the program and primarily, ourselves.

You see, becoming a Kundalini Yoga teacher has to do with so much more than learning yoga. This Teacher Training program, as taught by Yogi Bhajan, is meant to be transformative. It is meant to be challenging and “in your face.” That is the point. It is designed so that one both learns the teachings and how to teach them, but more importantly it is the learning of who one really is. And surely there is no greater quest than this on the spiritual path and indeed on this journey of being human.

After embarking on a disciplined, powerful, daily practice, I began to resolve my questions and doubts. I found myself in the teachings, in the early morning ambrosial hours—feeling like I was moving closer to my true home each morning. People of the Sikh faith also practice this ancient tradition, and that is fine with me. They are obviously ‘on to something.’ I felt privileged to be immersed in it all. And the questions from friends and family about wearing white and head coverings still come, but less often. It has all become a part of me now and those that know me accept it, even if they don’t understand it.

This Teacher Training program has been one of the single most profound experiences of my life so far. The caliber of Teacher Trainers from all over the world was unsurpassed. The teachings were delivered each month by teachers who had studied directly under Yogi Bhajan, and the light of his wisdom shone through each one of them. Having nine months to process these teachings was so ideal for me. The full month between training weekends allowed me to fully and gracefully integrate the teachings into my busy daily life, and still have the time and energy needed for my personal, family, and work obligations.

There were many of us who began this journey that were sure from the start that we wanted to teach. Conversely, some just wanted to immerse themselves more fully into their personal yoga practice. Yet, some that started out not wanting to teach have become dedicated teachers. Others who began with this desire, decided through their journey that teaching was not their end goal after all.

Whatever path we have all have chosen, our strong community that was built over that period of time continues to grow at PranaShanti, and is one for which I am so very grateful. From within this oasis we all continue our growth, finding constant support, allowing us to thrive.

Since graduating I have been teaching several classes every week. Often, I too hear someone outside the door when we chant or when I play the Gong, and I want to invite them in, understanding the potency and flow of the energy that we create in each and every class. I am not surprised that it leaks out under the door. I invite you to open that door to YOU.